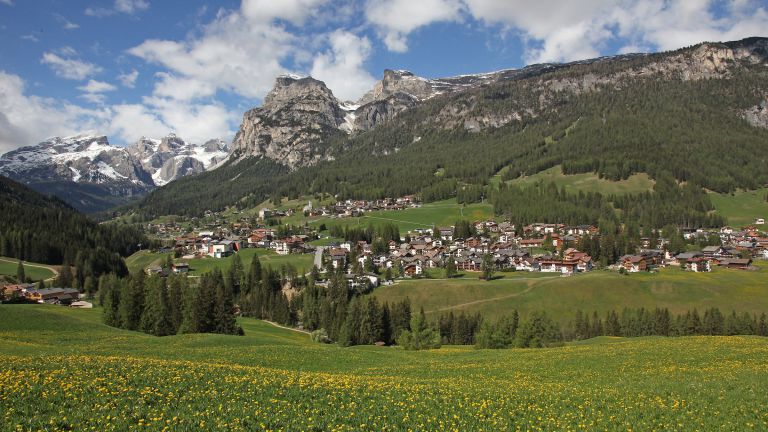 La Villa and
the Dolomites

In the heart of the Dolomites,
UNESCO World Heritage

The name "La Villa" comes from the Ladin word "Vila" (or "Viles" in plural), which are the typical historic peasant dwellings. The village of La Villa is located at 1,433 meters above sea level, in the center of Alta Badia and at the foot of Gardenazza and Piz La Ila highlands. The village is surrounded by the Puez-Odles and Fanes-Senes-Braies nature parks and is the perfect starting point for many walks and hikes.

In addition, the village of La Villa is a center of major sporting events, such as the Alpine Ski World Cup on the legendary Gran Risa slope or the starting point of the Maratona dles Dolomites. The village has about 1,164 inhabitants.

The Dolomites originated as a coral reef about 250 million years ago. At the bottom of the sea, hundreds of meters of sediment accumulated: shells, corals and calcareous algae that became rock. The clash - between the European continental plate and the African plate - raised these mountains over 3,000 meters. The name "Dolomites" derives from the French geologist Déodat de Dolomieu (1750 – 1801), who described the particular composition of the rock. In 2009 the Dolomites were declared UNESCO World Heritage Sites.
We will be happy to advise you:
T. +39 0471 847202
E. info@hotelciasatama.it
Hotel Ciasa Tamà
Str. Plaön 14
39036 La Villa (BZ)
T.+39 0471 847202
VAT No.: IT01446280214
©
Hotel Ciasa Tamà
Credits & Privacy
produced by