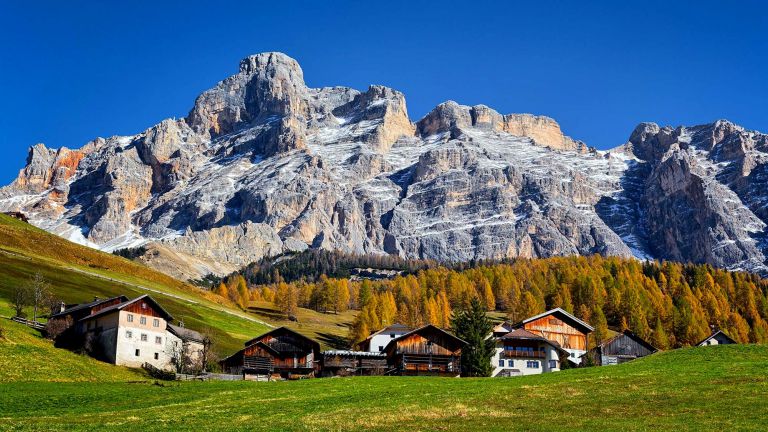 The history and language
of the Ladin people of the Dolomites

The Ladin language was formed during the first century CE, when the ancient language of the population named Reti (the first one that lived in the Dolomites) was mixed with the vulgar Latin spoken by the Roman soldiers who conquered the Alps. Nowadays, the Ladin language represents a spoken and recognized language.

Ladin is spoken not only in the Dolomites but also in Friuli and in the region of Grisons in Switzerland. In Ladinia it is the most spoken language and there are more dialects, that however, do not differ much from each other. For instance, in the Badia Valley the Badiot is spoken, in Gardena Valley the Gherdëina, in Fassa Valley the Fascian, in Livinallongo the Fodom, and in Ampezzo the Ampezan.

The schools of the Badia Valley follow the Parity Model of Ladin schools, in which the Ladin language is taught (both spoken and written) just like Italian and German languages. The Ladinia also has its own weekly newspaper "La Usc di Ladins" and some TV and radio broadcasts in Ladin. Furthermore, there are many publications in Ladin.
We will be happy to advise you:
T. +39 0471 847202
E. info@hotelciasatama.it
Hotel Ciasa Tamà
Str. Plaön 14
39036 La Villa (BZ)
T.+39 0471 847202
VAT No.: IT01446280214
©
Hotel Ciasa Tamà
Credits & Privacy
produced by